An 18th Century Dinner Service for a Notable Suffolk Gentleman 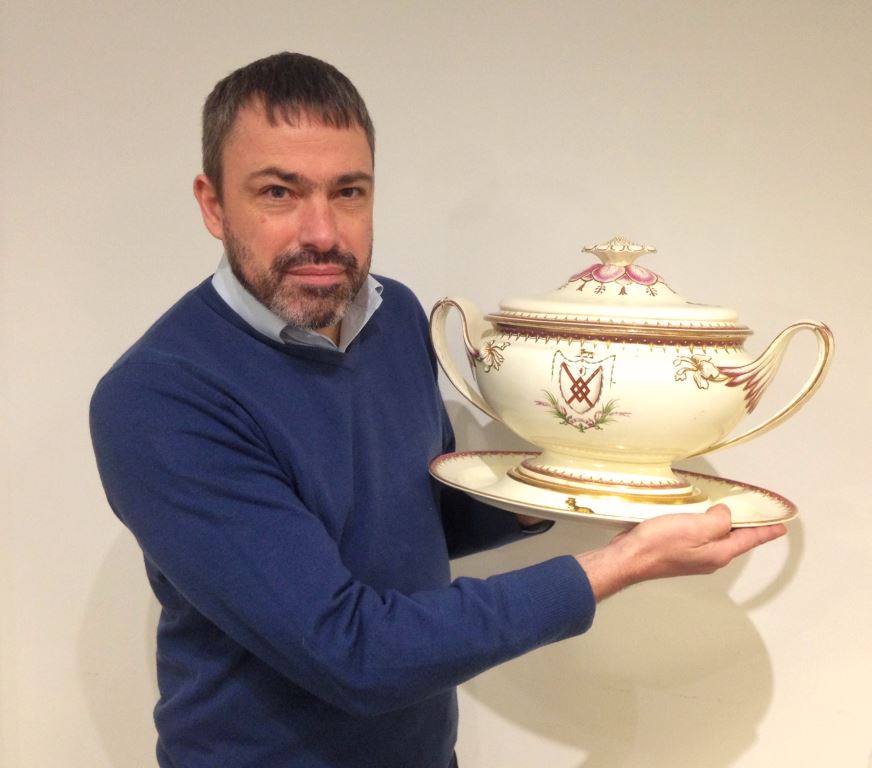 Duke’s are delighted to have discovered some important items from a historic and significant dinner service, to be included in their upcoming sale of Ceramics and Glass, with an impeccable provenance. The pieces, comprising an imposing tureen, plates and a pair of elegant wine coolers was made by Wedgwood in Staffordshire, about 250 years ago. The pieces are still brightly decorated, and emblazoned with the then newly established coat of arms of the Blake Baronet. The lots are set to sell for between £5,000-£10,000, but have already seen considerable interest from trade and private buyers, and Duke’s are expecting competitive bidding.

Porcelain was known as ‘white gold’ in the eighteenth century, due to its rarity and popularity in the English home. Fine ceramics, such as creamware, were only produced in England from around 1740 by potters in Staffordshire. This novelty factor, combined with Josiah Wedgwood’s continuous improvement of the earthenware into a refined ceramic, garnered much fame and acclaim to his creamware products. Creamware became so desirable that it graced almost every table in the land, from modest middle-class homes, ornamental tables in mansions in the country, and Queen Charlotte’s tea table.

The impressive pieces coming up for sale at Duke’s were evidently a pricey and lavish commission, as shown from the vibrant and detailed decoration of the pieces with a coat of arms, and lively red, purple and tropical green colouring and adornments. The coat of arms sports a sleek lion passant guardant (leopard walking with its head turned), above the motto ‘Confido in Probitate’, meaning ‘Trust in honesty’, further decorated with flourishing palm leaves – possibly a nod to the Blake family’s exotic heritage and profitable estates in St. Kitts.

Sir Patrick James Graham Blake, was first owner of these remarkable pieces, and the first Baronet of his name. Born in 1742, heir to the family estate and sugar plantations in St. Kitts, Blake underwent the prestigious schooling, growing up between the Caribbean and London, and attending Cambridge at the age of 18. At the age of 20 he returned to Surrey to wed Anabella Bunbury, an eligible young lady from an ancient Cheshire family. She was the daughter of the Reverend Sir William Bunbury, 5th Baronet, and sister-in-law of the infamous and decadent socialite Lady Sarah Lennox. The Bunbury family name could easily be a household name today, as Anabella’s brother, Sir Charles Bunbury, was an enthusiastic patron of horse racing. Legend has it that at one raucous party, the Earl of Derby proposed an exciting new flat race, and span a coin with Sir Charles to decide whether the race should be called the Derby or the Bunbury Stakes.

Having made such a prestigious marriage, Blake purchased the new, stylish red brick manor house Langham Hall in Bury St Edmunds, Suffolk, as a suitable residence for his new wife, who was accustomed to the luxury afforded to titled gentry and used to moving in the glamourous circles of high society. The couple would have lived an energetic social and public life. Raising their children at Langham Hall, attending society events at their house in Cavendish Square, London, and travelling to warmer climate to tend to Blake’s inherited properties and estates. Public recognition came to him at the early age of thirty, when he was elected the office for Member of Parliament for Sudbury between 1768 and 1784. On October 8th 1772, he received the title of the 1st Baronet Blake. He was only thirty years old, and had already achieved as much as a man twice his age. He had made a good marriage, stood as a Member of Parliament, held flourishing businesses in the Caribbean and a growing group of estates in England, all crowned by the recent bestowal of his hereditary title. His lavish lifestyle would have matched his high standing in society, and it is most likely that he would have ordered this very Wedgwood creamware dinner service as a celebratory gesture to mark his recent ascent into the titled gentry. Possibly destined for an important dinner with friends, colleagues and family to celebrate his rise in society, ordering the service would have been an event of great excitement to the domestic household. Commissioning dinner services emblazoned with the family coat of arms was a popular purchase in the 18th century, and Sir Patrick Blake would have used the top-of-the-range service to promote his family name to guests with a vast, fine and detailed colourful service; it wasn’t abnormal for armorial dinner services of this type to include up to 500 pieces to entertain guests at splendid suppers for every imaginable use. These remaining few pieces of a service of long lost grandeur are a wonderful discovery, and a genuine piece of English 18th century history.

Auctioneer and Duke’s senior valuer Matthew Denney commented, ‘This magnificent tureen, the wine coolers and other items from this important armorial service are amongst the finest examples of Wedgwood creamware to have been produced. The exuberance of the design alongside the elaborate coats of arms beautifully demonstrate the remarkable products that Wedgwood could create for his most important clients. Creating a service of this type when raised to title will have been a terrifically fashionable thing to do and we can only imagine the original owners excitement when it was first used.’ Duke’s will be holding a valuation morning on Thursday 12th for Ceramics, Glass and Works of Art to join the Wedgwood creamware service in our February sale of Fine Arts. If you would like more information on buying and selling with us, please contact the saleroom on 01305265080 or email [email protected]