'A Table From The Sea's Edge' 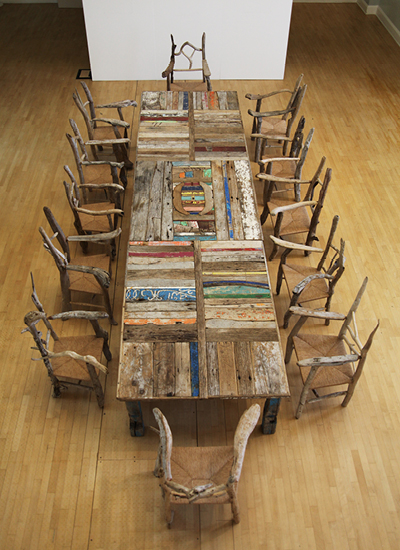 SILAS BIRTWISTLE (B. 1963)
‘A Table From The Sea’s Edge’
driftwood sculpture in the form of a conference table and twelve chairs,
the table 540cm long x 141cm wide x 72cm high,
with the added flexibility of separating into two individual tables if required.
The chairs, whilst all sharing the same classic proportions, each have a unique identity
and character that represents a different part of the world 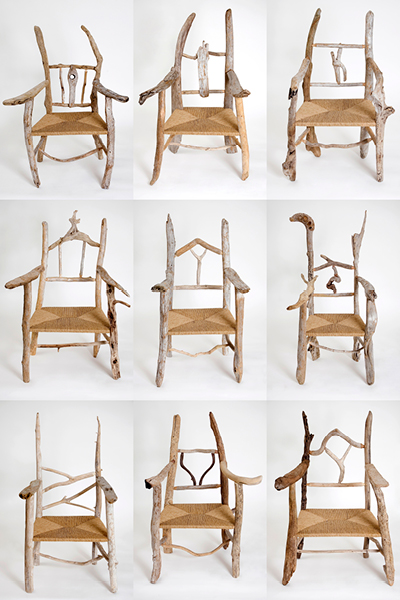 A Table From The Sea’s Edge is an art project, devised by Silas Birtwistle to raise awareness of environmental issues and to promote conservation of the world’s coastal and marine biodiversity. It was the artist’s contribution to the UN International Year of Biological Diversity in 2010.

The project aims to embody the rich biodiversity of nature by crafting a large conference table surrounded by twelve chairs, made entirely from beautiful examples of driftwood - collected from four key hotspots around the world: Belize, British Columbia, Malaysia and the East coast of Africa.

It is a dramatic statement on the environment, uniting different cultures and coastal communities, connecting land with sea, and symbolizing the boundary between marine and terrestrial ecosystems, making connections between man's land-based activities and the marine and coastal environment.

The sculpture was unveiled during the International Year of Biodiversity at the tenth meeting of the Conference of the Parties to the Convention on Biological Diversity (COP-10) which took place in Nagoya, Japan on October, 2010. It provided a platform for a multitude of high-level UN debates on environmental issues, and ceremonial signings of agreements.

Since Nagoya, it has been exhibited and used at a number of venues, including The Annual Meeting of The World Economic Forum, The World Museum, Liverpool, the London office of Price Waterhouse Coopers, The South Bank Centre, Save The Children International, Canary Wharf, Google and most recently on exhibition at The National Maritime Museum, Greenwich.

All profits from the sale of 'A Table from the Sea's Edge' will go to The Toledo Institute for Development and Environment (TIDE).

For further information about the project please visit www.atablefromtheseasedge.com