A King, A Queen and a Revolution 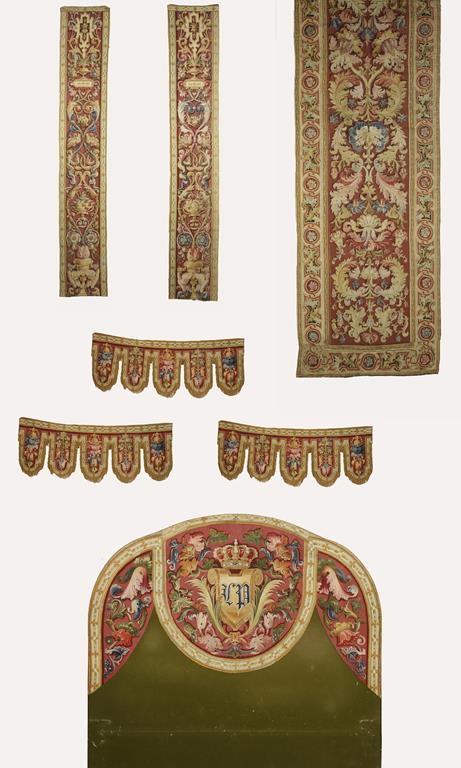 Duke’s of Dorchester have discovered an exceptional suite of royal bed hangings made for King Louis Philippe I of France to celebrate his Coronation in 1830.

The bed hangings and an associated carpet were identified by Guy Schwinge of Duke’s on a visit to a modest house in North Devon.

The elderly owner acquired the majority of the tapestry hangings almost fifty years ago and then, by chance, in 1981 he found three matching pelmets for sale in a shop in London.

The tapestries and carpet were probably made at the Gobelins Tapestry Works to celebrate the Coronation of King Louis Philippe I of France in 1830. The brightly coloured tapestries are worked with birds, scrolls and fruit in a formalised design and the headboard is dominated by the King’s initials – (LP) surmounted by a crown (see image).

The way in which the tapestries found their way to a house on the windswept North Devon coast provides a fascinating insight into the tumultuous times in Europe following the defeat of Napoleon at the Battle of Waterloo in 1815.

King Louis Philippe I of France was born at the Palais Royale in Paris on 6th October 1773. He survived the French Revolution and was eventually proclaimed King in 1830 after his cousin, Charles X, was forced to abdicate in the wake of the July Revolution of that year. His government, known as the July Monarchy, was dominated by members of the French elite and numerous former Napoleonic officials. His popularity faded as economic conditions in France deteriorated and in 1847 he was forced to abdicate after the outbreak of the second French Revolution.

Fearful of what happened to Louis XVI at the guillotine, the King left Paris under disguise riding in an ordinary cab under the name of “Mr Smith”. He fled to England where Queen Victoria lent him Claremont, a magnificent palladian mansion at Esher in Surrey.

Claremont had originally been a wedding present to the daughter of George IV, Princess Charlotte, and her husband Prince Leopold of Saxe-Coburg. It was Leopold who was instrumental in orchestrating the marriage of Queen Victoria and his nephew, Prince Albert. King Louis Philippe died in exile at Claremont on 26th August 1850. Sometime after this date the bedhangings and carpet were sold and lost from public view.

The Gobelins Tapestry Factory was revived under the Bourbon Restoration and in 1826 the manufacture of carpets was added to that of tapestry. Another exceptional carpet sharing the same royal provenance is known in a private collection.

Duke’s of Dorchester estimate that the unique royal bedhangings and carpet runner could fetch up to £40,000 when they go under the hammer in Dorchester on December 9th.