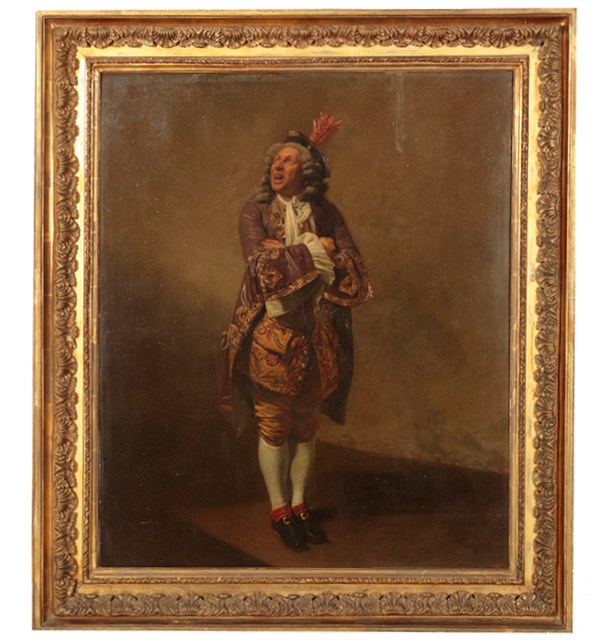 In its original eighteenth-century carved frame 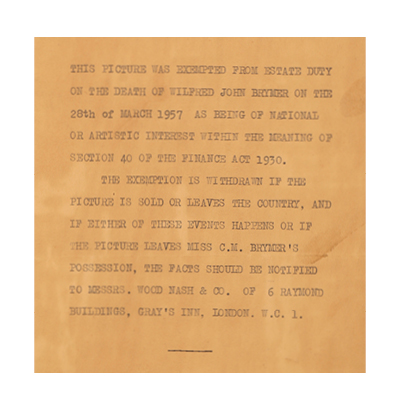 London, Royal Academy, 1796, no.85 (‘Mr Townsend as the beggar in the pantomime of Merry Sherwood’);

This little-known theatrical portrait is one of the finest works by Johan Zoffany from the end of his career. Depicting the comic actor Edward Townsend singing ‘The Beggar’, a song by the playwright John O’Keeffe written and set to music by William Reeve for Merry Sherwood, or Harlequin Forester by William Pearce, an entertainment on the theme of Robin Hood. Zoffany captures Townshend with his mouth open wide in the midst of the song. This unusually animated portrait is rendered with Zoffany’s characteristic attention to the minute details of costume and physiognomy. Zoffany was a pioneer of theatrical portraiture, where individual actors are portrayed in the roles for which they were most celebrated, it is a genre which was uniquely developed in Britain in the eighteenth century. Here the comic singer Edward Townsend is shown on stage singing in the midst of William Pearce’s popular pantomime Merry Sherwood. But rather than merely being an illustration of the entertainment, Zoffany paints a portrait of Townsend en role, exploiting a complex layer of relationships between audience and actor, viewer and painting. Zoffany’s theatrical portraits are regarded as some of his most innovative and beguiling works and only a handful remain in private collections, of which this is one of the finest. Preserved in outstanding condition and painted on a mahogany panel, this portrait has not been on the open market since the early nineteenth century and has not been exhibited in public since 1893.

By 1796 Johan Zoffany was at the height of his powers as a portrait painter, particularly paintings of complex conversation groups and interiors scenes, rich with domestic and decorative details. Recently returned from a period spent in India, where he had completed a series of remarkable images of European and Indian sitters, including Colonel Maudaunt’s Cock Match now in the Tate, London. Zoffany re-established himself as one of London’s leading portrait painters. Zoffany had found success in London in the 1760s producing a series of remarkable and hugely popular portraits of famous actors. Zoffany worked particularly closely with David Garrick, commemorating his most celebrated theatrical roles in a series of largely comic portraits.

The comic singer Edward Townsend sang The Beggar at the first performance of Pearce’s popular pantomime Merry Sherwood at Covent Garden on 21 December 1795. Townsend made the song popular and it became a favourite peace in his repertoire: he sang it at his benefit on 20 May 1796, and was still rendering it at Covent Garden in June 1800. The entertainment, and Townsend’s performance, were an immediate sensation. The success of the pantomime may well have prompted Zoffany to paint Townsend and to submit the painting for the annual exhibition at the Royal Academy in 1796, where the painting is described in the exhibition catalogue as: ‘Mr Townshend in the Beggar, full of expression and character, and a striking resemblance.’ The painting was hugely admired by contemporaries at the annual exhibition. The critic Anthony Pasquin noted:

‘Mr Townsend, the Comedian in the Character of a Beggar. Zoffani. This portrait is eminently characteristic, with a strict adherence to the minutiae of the stage dress. The countenance partakes of all the muscular whim of the original contour and expression of this supplicating visage.’

Robin Simon has noted that in his theatrical portraits, such as this, Zoffany’s: ‘nuanced approach enabled him to create a distinctive effect: that of depicting the actors both in and out of character at the same time. This duality lies at the heart of his achievement; but it is also reflects the contemporary practice of a number of leading comic actors who, in a tradition that survives in the British pantomime, would interact, sometimes even verbally, with the audience during performance.’[1] There is a sense that in the present portrait Zoffany has caught Townshend totally absorbed in his performance. It is this duality which made Zoffany’s theatrical portraits so publicly successful.

The present painting has not been publicly exhibited since 1893, when it was lent to the Royal Academy’s annual exhibition of old master paintings, as a consequence it has remained largely unknown to scholars. Mary Webster, in her authoritative 2011 monograph on Zoffany, assumed the painting was missing. The present portrait remained in Zoffany’s collection and was included in his posthumous auction in 1811, it was acquired in 1820 by Thomas Wilkinson the son of Jacob Wilkinson who was one of Zoffany’s most important supporters. A Director of the East India Company, Wilkinson acquired The Watercress Girl by Zoffany in 1780 and its pendant, The Flower Girl. Zoffany also painted his portrait in 1782 (The Chequers Trust) and Wilkinson, in turn, was one of those who supported Zoffany’s petition to travel to India. The painting passed to Thomas Wilkinson’s daughter Jane Anne, who married the Reverend William Thomas Parr Brymer, the painting has remained by descent in the Brymer family ever since. 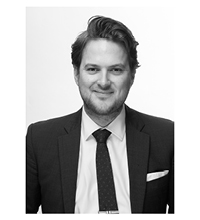